…in which I throw all credibility to the wind.

In my ever continuing quest to reach a wider audience (15 is my current short-term goal), I decided a while ago to start breaking down gender boundaries with an article on You Got Served. Coupled with the personal minimum of bi-monthly updates I’ve promised myself, I must now subject you to a post that will make the B2K dancing epic look like The Wild Bunch. 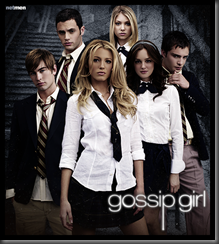 Gossip Girl tells the story of self-exiled New York socialite Serena van der Woodsen (future Green Lantern girlfriend Blake Lively) and her return to the NY gossip scene, much to the chagrin of former BFF Blair Waldorf (2010’s Single White Female Leighton Meester). You see, Serena had some drunken sexytimes with Blair’s boyfriend. Instead of just having a catfight and ignoring each other for a while, exile had to happen. An overreaction? Well, if this is a dealbreaker for you, it’s probably for the best you just pass up this show. Drama queen exaggeration is the order of the day here.

Pretty much every problem that drives the plot – what loose plot there is – revolves around the protagonist’s social standing. I had some problems, initially, bringing myself to care about the plight of Serena & co. Social faux pas in my own high school years didn’t seem to have such epic and dramatic consequences. Maybe I adjusted my viewing mode, or maybe the writers found their footing, but a few episodes into it I found myself not only relieved of my skepticism but actually… emotionally involved?

One of the better decisions the writers made was not to draw out the Serena/Blair feud the show started with. Four episodes was more than enough: the stage was set, the players in motion.

Ultraplayer Chuck Bass is perhaps the show’s greatest victory so far. Coming off of not one but TWO attempted rapes in the first episode (!!), this character embodies the ultimate hedonism of the super rich (within the limitations of teen-oriented television, of course). I don’t know to what extent Chuck is supposed to be a villain – everyone kind of is in this morally abhorrent biotope. I do know that his smug face pretty much lights up any scene he’s in with pervy remarks and other general innuendo. There is a strange, kind of touching affection Chuck has towards Blair like some sort of Dolce wearing Gillman. They reminded me a bit of John Malkovich and Glenn Close in Dangerous Liaisons: veteran players always on the lookout for the next challenge/victim. Which, in turn, brought me to the conclusion that this would probably have somewhat of a geek following if you had the same plots set at some court in 18th century France or something.

The show’s biggest misfire is the Humphrey family and their tribulations. So-called audience identification characters, these woe-is-me bumfucks are a stark contrast to cartoons like Blair, Chuck or Carter Baizen. Besides not being any fun to follow, they even fail at being relatable by simply living in their huge apartment, owning an art gallery and going to the same exclusive school as the rich kids. I guess because the apartment looks like an ironic 90s throwback we’re all supposed to relate. Protip for anyone currently writing that Dick Cheney biopic: make sure there’s an Ace of Base poster in view in the background at all times.

It actually feels decadent to watch this show while I’m struggling to get through something with a social conscience like Treme. It’s been a while since I could actually classify something as a “guilty pleasure”, but here we are. I know I love it.