The Day The Clown Lied 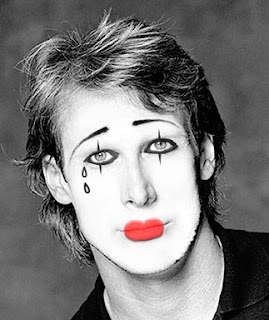 This depiction of Michael Bay as the tearful clown character Pierrot was meant to be a prelude to an article defending the sensitive artiste Bay everyone was so eager to tear down after his latest opus, Transformers II: Revenge of the Fallen. After a bit of soul-searching, I decided to take it a few steps further than a mere review of the film. I had, however, already commissioned this simply lovely photoshop from my good friend Rutger "Wesley Gibson" Stevelmans, and I present it to you here in order not to let his hard work go to waste.

Suffice to say, I enjoyed Transformers II quite a bit. Internet critic Drew McWeeny from HitFix said it best:

Transformers II is Bay's White Album: it's overlong, not everything works, but everything in it is 100% pure, unadulterated Bay.

If you are like me (a freedom-loving patriot) you love everything that glorious son of a bitch stands for. He is a lulz-provider supreme, and his latest is no exception, even if it is indeed bloated and "a film with no adult supervision" as CHUD.com's Devin Faraci put it.

The last few days I'd been trying to piece together what exactly I liked about the film. As I stood there assembling engines (hey, even without tenure, ya gots ta pay the billz), I realised something rather important. There were things in Transformers II that actually worked for me beyond the "OH LOL BAY WHAT U DO NOW MAN" level. They mostly involved robot king Optimus Prime, his yellow buddy Bumblebee or puny human Shia LaBoeuf doing noble shit. There's something about that crazy over the top "goddamn give me six more insert shots and a fucking orange sunset hell yes" Michael Bay style, coupled with the overly earnest (voice) acting from LaBoeuf and Peter Cullen that just makes their scenes together click so well. Coupled with Steve Jablonsky's Hans Zimmer-lite score, I've pretty much booked a ticket to Soldsville. Cheesy? Hell yes. But it works.

But why? Why does it work? Why should I wonder? Eight hour work days are long, is one thing. If we take into consideration the basic plot of the movie, a lot is revealed. The transformers ran around the galaxy for millennia harvesting suns for their sweet sweet ENERGON (hahahaha). They were cool enough to let planets with life on them slide, though. One of the original seven OG's said fuck that, and wanted to harvest our sun. Us humans, being shitty ass pyramid folk back then, couldn't really stop him. So his brothers did! Lucky for us. He was put into stasis or some shit because they couldn't defeat him and later starts stirring up shit in our time, using his disciple Megatron (the first film's baddie) and his cronies. Talk about some petty shit: this big baby's brothers are long fucking dead and all he wants to do is get back at them by blowing up that dumb sun anyway. Neener neener!

On the other side, we've got Optimus and the Autobots (I know, I know) who think Earth is just swell. In fact, Optimus'll go on about it for quite some time if you let him. The conflict between the Fallen/Megatron's Decepticons (yes...) and the Autobots is never made more clear than in this exchange between Megatron and Optimus:

Megatron: "Is the future of our race not worth one miserable human life?"

Optimus: "You'd never stop at one."

Simple. Easy. Black and white. After that line, Optimus lunges at Megatron and I dare you not to think for even a single microsecond: "Fuck yeah, kick his ass, truckbot!". Because chances are you will, even though you might not want to admit being that into a movie so cheesy.

Transformers II has a few of those scenes of corny-as-shit-but-I'm-kinda-diggin'-it ultra-heroism. I'm a total mark for those scenes. Other examples include Gandalf and Eomer charging downhill in The Lord of the Rings: The Two Towers, the ride of the Rohirrim in The Return of the King, Spider-Man's return in Spider-Man 2, "Soo-oo-ooperman" in The Iron Giant, and I could go on. If the movie works, you want to be there. You want to charge down the hill with Gandalf, you wanna slap JJ upside the head for dissin' on Spidey, you wanna pull Oskar out of that pool (I'm treading dangerous grounds with that one, I'm sure), ...

You want to be there because those characters are fighting The Good Fight. And unfortunately, there is no such thing as THE Good Fight. There is no evil robot tyrant or orc horde to dive head-first into combat against. Again, thanks to long hours on an assembly line, I was reminded of a nazi propaganda film we partially saw in a high school history class. Hitlerjunge Quex (or Hitler Youth Quest) is a 1933 is a film detailing the noble sacrifice of a young Hitler Youth paper boy (!) nobly killed in action by socialists (!), giving his life to finish his nazi paper route (!!!). Here's the whole damn thing, if you want:

Now, Goebbels was a clever fella. He done whipped up all of Germany into a frenzy by '39 -- and probably sooner. He knew folks love a martyr -- the most powerful hero is the one that is ended in service of others. I tell myself history has taught us all valuable lessons and I would not be as easy a mark as that. But the thing is, this is some primal stuff.

Humanity has always had their saviors holding back The Night. But now there is scarcely any more Night you'd break out the capital N's for. In the times when Beowulf or even Gilgamesh roamed in the hearts of men rather than the minds of scholars, you'd go to sleep not knowing if the same amount of people in your village would be there in the morning. You see, there was The Night. To hold that back, you could slaughter a chicken to appease the spirits. Or maybe do a wild dance. Or maybe tell a story. Stories of men who faced The Night and came back triumphant, or died saving their loved ones. Did it help? Did telling stories stop a panther from stealing down upon the village and make off with a baby or something? Of course it didn't, most of that shit was just bold faced lies.

But you know what? It made people feel good. It made them feel stronger. Inspired them. Maybe one village's youngsters teamed up and killed that lion who'd been slaughtering cattle, emboldened by the shaman's tales. And so, while the night was still there, The Night had been beaten back, even if just for a bit. This makes the old wise man's lies something more than just lies. That's right. They become Lies.

If there is a form of magic mankind has mastered, it is the power of Lies. Every time you do something that is unnecessary for survival, but you just absolutely feel the need to do, you tell a Lie. A Lie is not a bad thing. In fact, you probably can't imagine a life without Lies anymore. Watch a movie, sing a song, dance, write, love, ... You don't HAVE to do these things to live. But oh, doesn't it all seem a bit less scary now that you have?